(This is an excerpt taken from Epsilon’s 1Q21 investor letter, released on April 7th, 2021)

Inflation is at the tip of everyone’s tongue. The current state of markets could herald the beginning of a macroeconomic regime-shift. The downstream consequences impact the relative positioning of participants and the opportunity for alpha capture. Beginning in mid-February, higher duration equities have taken it on the chin. This has let some of the air out of the most speculative pockets of the market.

The catalyst, in part, is legislative. The current situation can be described as the Democratic party breaking its multi-decade relationship with neoliberalism. Summers is out, and Krugman is in, proverbially speaking. This new policy approach aims to aggressively tackle secular stagnation, the fallout of the coronavirus, and a broader mandate of social inclusion and inequality. What remains to be seen is whether huge fiscal impulse can indeed combat the long-term secular forces dragging down the so-called natural rate of unemployment, without stoking runaway inflation. Some of the drivers of change range further than fiscal and tax policy, including:

What are investors left with? In a sense, we are stuck between a rock and a hard place: high duration equities have correlated with dominant, disruptive technologies and have delivered huge revenue growth. Cyclically rebounding / deep value securities have correlated with the old-line economy, albeit with forward-looking beta to the prospect of robust recovery. The job of the active manager is to sort between the two piles: avoiding the unfounded and often extreme multiples in the former, and the flotsam in the latter.

This task isn’t as simple as pattern-matching to past cycles, jumping from one boat to another. This market is different, and the skill sets for successful growth investing is different (for most practitioners) from cyclicals. Unlike in 2000, many from the growth pile have dominant or emergent earnings (e.g., FANG).Some undoubtedly have unsustainable margin and dubious terminal profitability, but this is not the same as eyeball-based valuations. The pitch is not as glaringly obvious as dot-com; the market is never so forgiving.

Is Winter Coming for The Boom Firm?

In a recent paper by Kilic, Yang, and Zhang titled The Great Divorce Between Investment and Profitability, the authors attempt to explain a peculiar forty-year trend in financial markets: the change in relationship between investment and profitability factor premia. Using the Fama-French RMW (profitability) and CMA (investment) factors, they describe how the correlation of the two factors[1] abruptly changes from negative to positive. This began roughly around 1980 as their chart of 10-year moving averages of monthly risk premia for the two factors demonstrates: 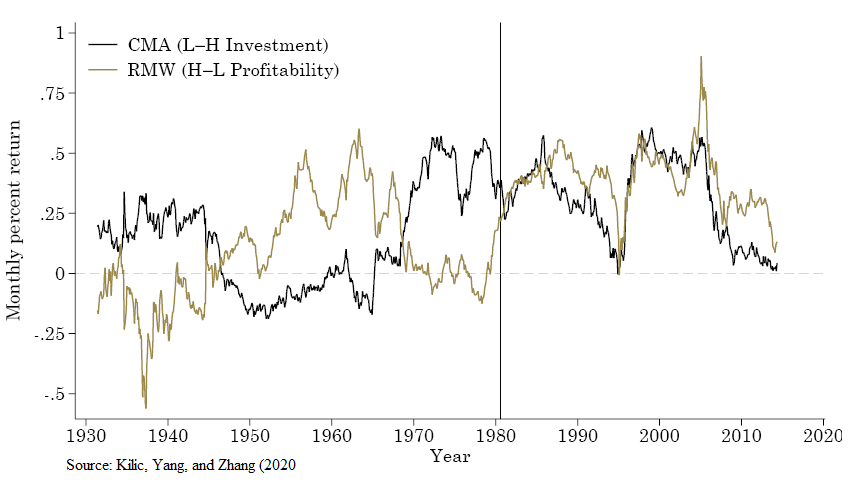 The authors show that this isn’t a change in the investment policies within firms but rather a change in the types of firms comprising public markets. They hypothesize that this change is caused by “firms with higher duration…lead[ing] them to invest more despite having lower current profitability.”

They call these types of firms “boom firms.” Recent examples cited include Amazon, Biogen, and Booking. Boom firms effectively play a much longer game, plowing back operating cash flow[2]into investment, suppressing profitability. Other research on the subject, including the writing of Brian Arthur, suggests that internet-related technology unlocks ‘increasing return’ dynamics, which companies should race to invest in for greater terminal profitability.

This is currently best exemplified by the prodigious capital expenditure made across technology giants in the public-cloud space. Amazon is perhaps the sine qua non of this phenomenon. It’s relationship of high investment leading to delayed and non-linear profitability was poorly misunderstood by the market, as recently as the mid 2010s. As we wrote in our 2Q20 Letter:

One feather the bulls have on their cap is the pattern of exceptional companies and their wonderful management teams finding a way to expand their TAMs into areas that even bullish models seem to miss. The classic example would be Amazon (again) with AWS. However, anecdote is dangerous, and investors must soberly assess if the 50x sales company they invest in will, indeed, be the next Amazon. There is only one, after all.

Returning to 1980, the last forty years could be distilled as a period of secular interest rate decline and the ascendance of Thatcher/Reagan era reforms. If the current moment is a reversal of these trends (a big if), will the relationship between investment and profitability revert to its prior state? Will it no longer be lucrative for firms to pursuit a boom model? This is the trillion-dollar question behind the story of duration, technology, and growth vs value, writ large. It weighs heavily on how hedge funds – and by extension, our portfolios – are positioned.

[2] or the largesse of shareholders