Process orientation is all well and good, but can it also be biased? The ascent of behavioral finance and its recent adoption across fund managers has curiously diverged with the broader public discourse surrounding information biases. On the one hand, we in the investment industry are more aware than ever of anchoring biases, availability heuristics and their ilk. On the other hand, society is more concerned than ever with filter bubbles, the clefting effects of social media, and political balkanization. Did the investment industry dodge a bullet? Does the practice of money management shield us from the worst of our modern social biases?

Maybe. The jury is still out on the bottom-line efficacy of behavioral finance[1]. We say that as a firm that strongly believes in the value of eliminating bias. Even if one attempts to be a devout follower of the behavioral finance practice, there are pernicious forms of bias that do not spare even the wary.

Myside Bias, as detailed by Professor Keith Stanovich in his wonderful book The Bias That Divides Us is a somewhat unique risk. It is uncorrelated with intelligence, as many other forms of bias are. This makes it a silent killer for investors. It inflicts scientific analysis, a field that prides itself on objectivity. Myside bias strikes at the core of human identity, what Stanovich defines as distal beliefs. These beliefs are not testable and often fall in the nebulous area around ethics and values. But they rear their ugly head in the analysis of data, not simply debates on morality.

Do investors need to worry about distal beliefs? Setting aside the can of worms that is ESG investing, there are core examples of distal beliefs in security evaluation. The canonical example is value vs growth. The investment universe, the vernacular, and methods of analysis are so vastly different across these camps that they become their own beliefs. Strong adherents to either camp arguably portray distal beliefs regarding their investing philosophy. A Venture Capitalist might not understand the concept of free cash flow yield, just as a Grahamite might never underwrite a security that has no profitability and trades at double digit sales multiples. This is like oil and water.

Stanovich cites a hefty amount of evidence showing how myside bias is problematic for educated and process driven individuals. Perhaps the most striking case study comes from a 2015 paper by Michael Huemer[2]. In it, the author takes a distal belief (views on capital punishment ) and populates a 2x2 matrix of one’s view on the subject vs a prescriptive of its application: if capital punishment does/does not act as a crime deterrent; if it does/does not ensnare innocent people. The question: do thoughtful individuals populate arguments that fit into the inconvenient squares? Can individuals accept that capital punishment may act as a crime deterrent but also may kill innocent people?

Huemer’s research is a resounding no. Our prior beliefs dissuade us from forming rational arguments. The point about distal beliefs is they override individuals’ compromise functions, making it harder to evaluate trade-offs in a dispassionate fashion.

The (value) investing analogy would be as follows: valuation founded upon earnings and free cash flow yield is the soundest way to invest, but generationally phenomenal companies can trade unprofitably on double-digit sales multiples. This is a tough box for a value investor to square. The inverse applies for growth. Other examples may include quality vs cyclicals. To oversimplify: 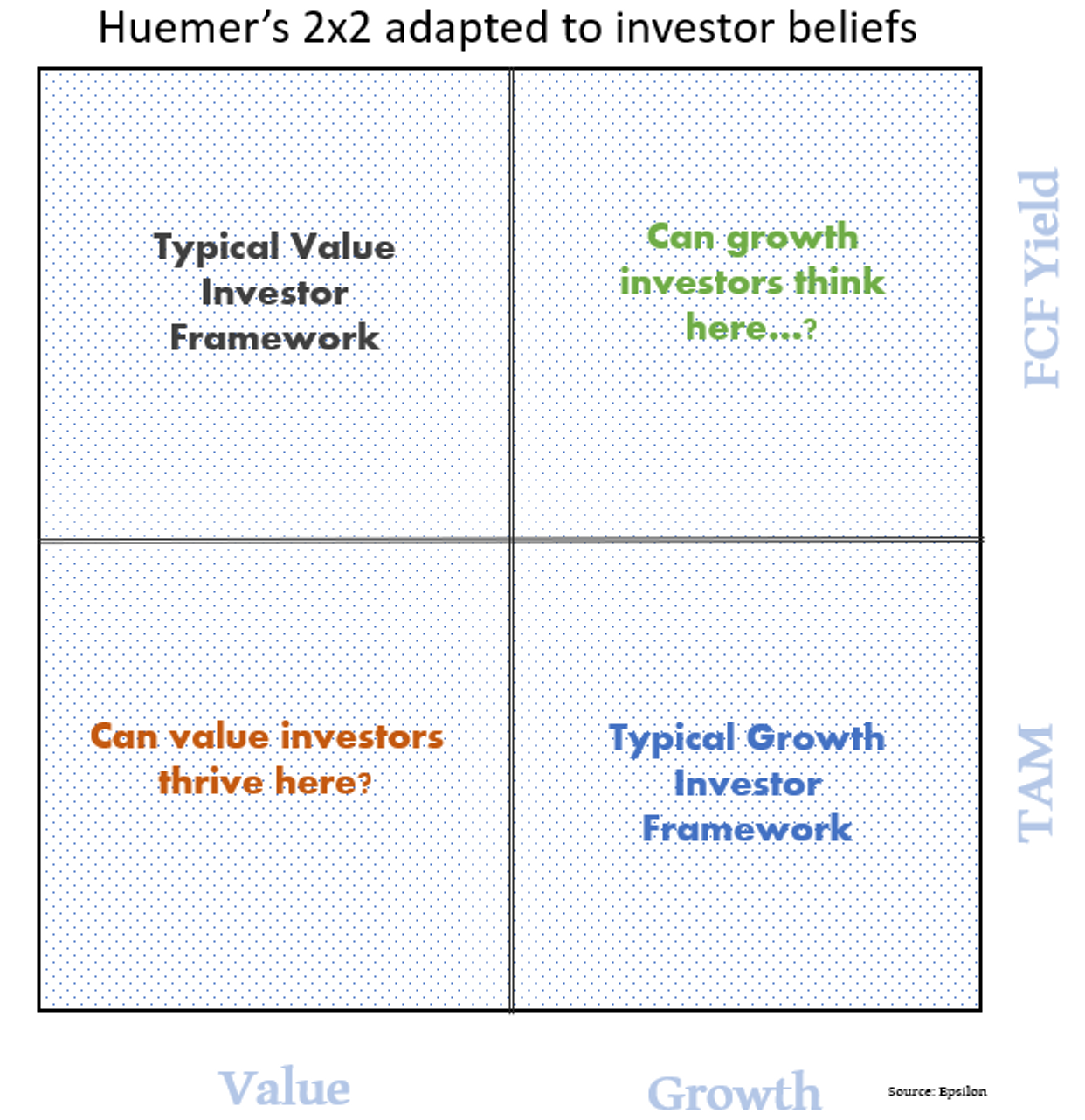 Reading Stanovich, one risks feeling a bit depressed, zapped of agency. Should we as investors harbor any distal beliefs? Should we strive for a certain detached worldview like a tabula rasa machine? We’re not sure that is possible (let alone advisable) even though we do think a certain cold calculus can be wired in one’s thinking through years of maniacal focus on markets. We have written in the past[3] about the principle of having strong beliefs weakly held. We think this is the best framework for inoculating oneself from myside bias.

To make this cognizance actionable, there are a few things we’ve done to buttress our process. As an example, we welcomed a few interns to our team and took a peculiar approach to our selection across a few hundred applicants: we split resumes into two piles. Whenever one selected a candidate based upon resume strength/fit, we had the other party conduct a phone interview as a next step.

The catch was we didn’t provide the resume to the other, and we explicitly told the candidate not to reveal certain information such as their school on the phone call. The goal was to divorce the bias of reputation and perceived favorability from the secondary screen. Small steps like this extend to the analysis of experiments; anonymizing statistical output to avoid contorting the interpretation of results (“this methodology of course is biased by the parameters; this one needs to be winsorized because of its tails, let’s re-run them this way…”). We can't fully tame my-side bias, but we can be cognizant of its cost and strive to protect our process.

[1] Notwithstanding several scandals in published research, there is the broader replication crisis across the social sciences.