Rules, like birds, must exist before they can be stuffed. – John Ryle

In 1895, Lewis Carroll submitted a short fable to the journal Mind, A Quarterly Review of Psychology and Philosophy. In it, two fictional characters (Tortoise and Achilles) debate over a regress argument. A regress argument is a fancy logical term for an endless justification. Like a child constantly asking a parent ‘why’, in a regress argument there is no root answer. This is so with the child because she lacks the foundational principles underlying logical reasoning. Even so, what the child unearths can often be deeper than we imagine. The root primitives of ‘why’ delve into the most unanswerable questions. Think of a child asking why the sky is blue. If you’re somewhat versed in physics, you can answer maybe 2-3 levels of why, but by the fifth why we are scratching at the enigmas of existence.

The most famous (and topical) example of a regress argument is “Turtles All The Way Down. ”You hear it often, especially in West Coast circles. In Carrol’s case, the venerable Achilles attempts to convince the Tortoise that if A-> B and B-> C, then A->C.This is commonly referred to in logic as modus ponens and transitivity. Any inquiry into formal logic begins with modus ponens and its sibling modus tollens.The Tortoise isn’t buying it, tormenting logical Achilles. Achilles proceeds to provide additional antecedents to strengthen his argument, all of which are additive, but don’t address the Tortoise’s intransigence. The Tortoise doesn’t budge, dragging poor Achilles into an endless argument. 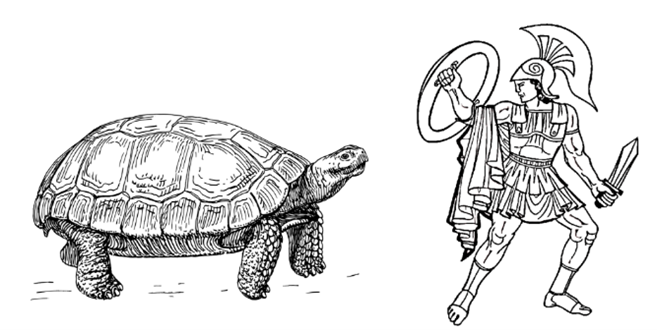 What does this have to do with Epsilon, let alone investing?Well, it reminds us of today’s market environment. Various novices are acting as the Tortoise and the venerable professional as Achilles. Professional investors are pleading with Robinhood day traders to apply the principles of valuation to their active investing. Robinhood traders are asking why and proceeding to invest with their own fancy. This infuriates the professional, who sees this behavior as irrational and untethered from reason. The professional seeks assets which have an intrinsic value below their tradable value and does so through diligent research, modeling, and valuation. The goal being to deliver the most unit return per unit of risk.

But these concepts do not ring true with our Robinhood tortoises. For them, investing is about different, more curious things. Their goals seemingly disregard any formal notion of risk or traditional valuation. Perhaps their interest is in economic transformation, or thrill-seeking. Perhaps it is about social causes. We’re not quite sure.

What we’re quite sure of is that markets are pari-mutuel, and the self-reinforcing behavior of this new class of investors is an undeniable force to be reckoned with. This is evinced by the proliferation in retail brokerage accounts and the explosion of small-lot near-expiry options trading. These have become major drivers of security prices. The Pavlovian feedback these tortoises have received from their preliminary success is overriding any teachings an investing Oracle can provide. Besides, why listen to “has-beens” preaching logical valuation when your PA just trebled in the span of a few months?

Immediately, the skeptic will look at this, look at our current market environment, look at prior phenomenon with similar setups, and conclude a bubble is primed to pop. Modus ponens! They would point to the technology bubble of 2000, or the housing bubble of 2008. Sure, the timing is difficult, but the analogy seems strong, and it will only be a matter of when not how. It almost feels karmic.

In our estimation, there is a tinge of hubris to this line of thinking. If you look at markets as complex adaptive ecosystems, you must concede that they evolve based upon prior collective learnings. This is not to say that the scars of prior excess tamp down bubbles in perpetuity; they clearly do not because our base desires are more potent than historical lessons.

Rather, there is a certain reflexivity innate in the analogizing of the past with the present. This leads to an unpredictable mutation of behavior with each succession. Let’s unpack that. Perhaps the most interesting mutation that we have seen has been in the cryptocurrency space, an asset class that has infuriated many an Achilles. There is an abundance of attention and capital committed to that space, and there are certainly dialogues around the sustainability and trajectory of its daring experiment.

When hard-pressed, educated proponents will actually advocate for ponzi-like characteristics associated with cryptocurrencies. Such speculative instruments lack a formal link between their asset price and any intrinsic value. I.e., if bitcoin is solely a digital form of gold, then the value creation afforded to an early proponent can only be derived by another actor purchasing the asset at a dearer price. This is what many an Achilles would call ‘greater fool theory’.

Instead of eschewing that ‘greater fool’ stigma, crypto-Tortoises embrace it, arguing that prior bubble-like systems are good; that they paved the way for great strides forward in technological achievement. E.g., the telecommunications bubble of the late 1990s saw huge excesses in capital expenditures on infrastructure like fiber. That bubble was clearly unsustainable. Some estimate losses associated with that capital expenditure of the order of $750 billion[1]. Now our clever proponents would argue that loss-leading perversely laid the foundation for the ascendant internet 2.0 economy just two decades later, with trillions of dollars of real value creation.

Whether or not that is a valid line of reasoning, this to us is a clear example of the bubble narrative mutating. These mutations are why it is so hard to time (let alone call) a bubble. The Achilles Heel of the bubble dynamic is now being embraced as a working piece of the system. This isn’t solely within the realm of cryptocurrencies but has wormed its way from the underwriting of Silicon Valley Venture Capitalists to the public markets.

Today with so much of the market capitalization of large cap equities tied to world-beating platform companies, loss-leading to fund a potentially dominant steady-state business has become de rigueur in the increasingly high-stakes world of technology investing. Some of these large cap equities indeed sport massive market capitalizations having not even found that dominant steady-state! There are of course wonderful examples of businesses that inflect incredible profitability once their dominance becomes entrenched, and the fear of missing that has fueled a seeming acceptance of valuation scope creep: from earnings to revenue to TAM. We wrote about this in our 2Q20 investor letter:

The narrative is that paying high multiples for exceptional businesses will work out in the long-term, and the last decade only proves it. There seems to be less of a concern on interest rates, execution risk at the corporate level, let alone disruption invited by abnormal growth. Generating abnormal growth, demonstrating large TAMs, and having the potential for increasing returns through network effects takes the cake.

Reverting back to Carroll, there are interesting parallels between 1893, when he submitted this piece, and today. 1893 was also a period of great economic convulsion and uncertainty. Such environments tend to cause societies to reexamine existing norms. It is little wonder we are in a current environment where the syllogisms underpinning investment logic are being questioned. This setup gives us considerable pause.

Some view this as a cause for de-risking; going to cash or getting defensive. They may end up being right. But timing such a decision is a huge risk in and of itself. As the old investing adage goes, “being early is being wrong.” Case in point: many of these arguments echoed true to investors at many points of the recent cycle (2013, 2017, even last year!). It is human nature once wedded to a market-timing position to simply move the goal post as things keep getting more expensive. Ask anyone with the misfortune of shorting Tesla for the last half decade. Our thought process of navigating this was outlined in our 3Q20 letter:

Investing across the spectrum with a focus on intrinsic value is our prescriptive for success. The key is not to dogmatically look back at standard deviations from historical norm. Instead, investors should focus on improving the probability of success with margin of safety / structural advantage at your side. Marrying such a framework with a sensible risk management philosophy gives an investor a better chance of navigating an increasingly narrow strait.

To this, we would add the following: avoiding a myopic view toward the market is increasingly important, as is thinking about systematic risk reduction. We do the former in our investment process by deliberately including signals that may be cyclically out of favor, representing variant perspective. As a result, our portfolios sometimes have a ‘Jekyll and Hyde’ characteristic, where we own issuances that one would rarely see paired together in a portfolio: deep value-distressed with pre-earnings disruptors.

To the latter, our portfolio construction is rules-based. We systematically rebalance on a regular cadence. This protects us from any individual outsized gains mean-reverting should the winds of today’s market quickly change. This seems particularly prudent when one is exposed to positions with the potential of becoming a steady-state dominant platform but run the risk of disruption.

Adherence to rules can be especially important when the climate become increasingly abnormal. Our behavioral biases are the most pernicious in such circumstances. Adherence to these rules allows us to fret less about the drumbeat of the market. Instead,our focus is to ensure we deliver a wisdom of the crowd rather than a mania of the mob. To that we are ever vigilant.