1. Can we accept that the moniker “The Next Buffett” is cursed? Its stink is comparable to the John Madden football video game cover. Its blighted crown has been bestowed upon Eddie Lampert before his foray into Sears, Bill Ackman during his Valeant stake, Chamath Palihapitiya during his SPAC escapades, and perhaps most infamously, to Sam Bankman-Fried. 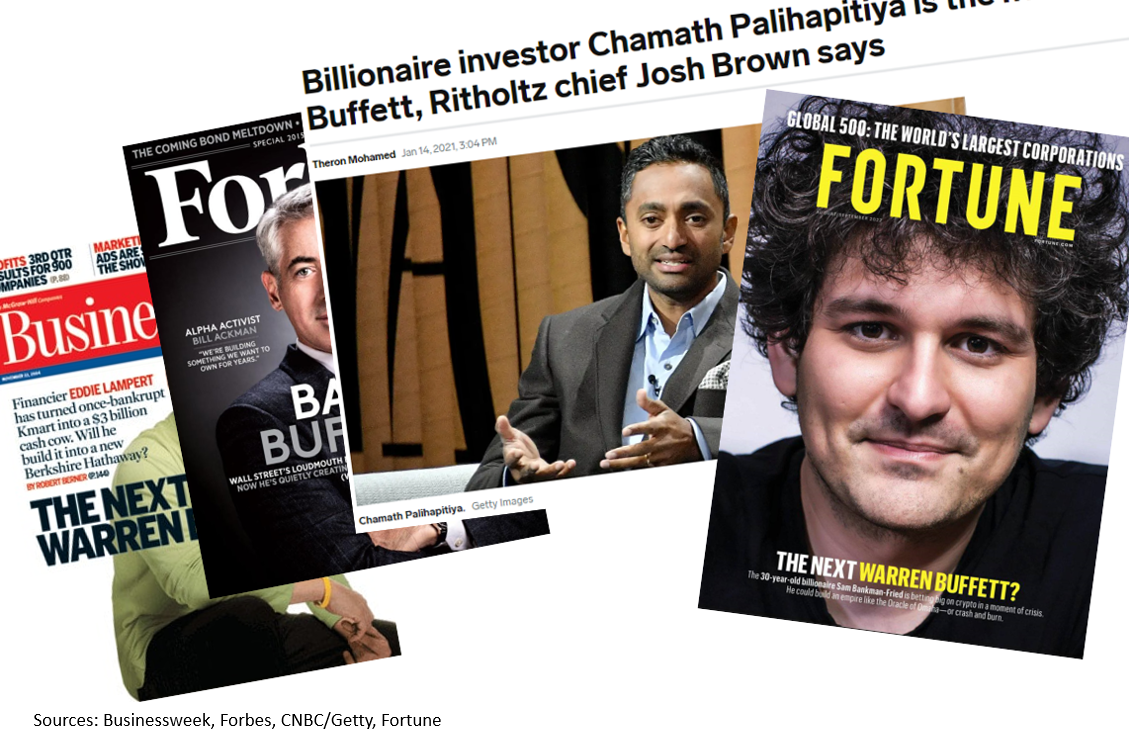 I would resist lumping these individuals together. They differ in style, substance, and duration. To this author, some are truly exceptional investors. The key takeaway is the media’s insatiable desire to anoint an heir apparent, a wunderkind that basks in the limelight. This prescriptive sure feels like a contrarian indicator for one simple reason: what is en vogue is almost assuredly not cut from the same cloth as Buffett. Mr. Buffett’s investment style does not sway with the wind.

2. For how many years of this torrential bull market has Berkshire been maligned as being out of touch? During the tech and software boom of the last 7 years, Buffett “whiffed” on companies such as Amazon and Google (the latter, explicitly mentioned by his lieutenant Todd Combs in a recent interview). His sole (meaningful) FANG pick was Apple, which was viewed as the “boomer” hardware choice vs the lighter, more agile internet-focused firms. His 2019 preferred investment in Occidental felt like a headscratcher when sexy private rounds for fintech and software companies were all the rage. His cash pile during the torrential rebound of 2020 was perceived as an admission of weakness. No wonder the news cycle is always searching to anoint another.

3. What is it that differentiates Buffett? For starters, a rock-solid foundation and a near unwavering commitment to his principles. Delving into why Buffett chose Apple as his largest single investment in history is instructive. In a great Epsilon Theory (no relation) post about stock based compensation, Ben Hunt adroitly notes that Apple is unique across FANG companies in its treatment of shareholders. It actually returns free cash flow to shareholders, rather than merely sterilizing stock-based compensation/dilution through buybacks (see Epsilon Theory chart below): 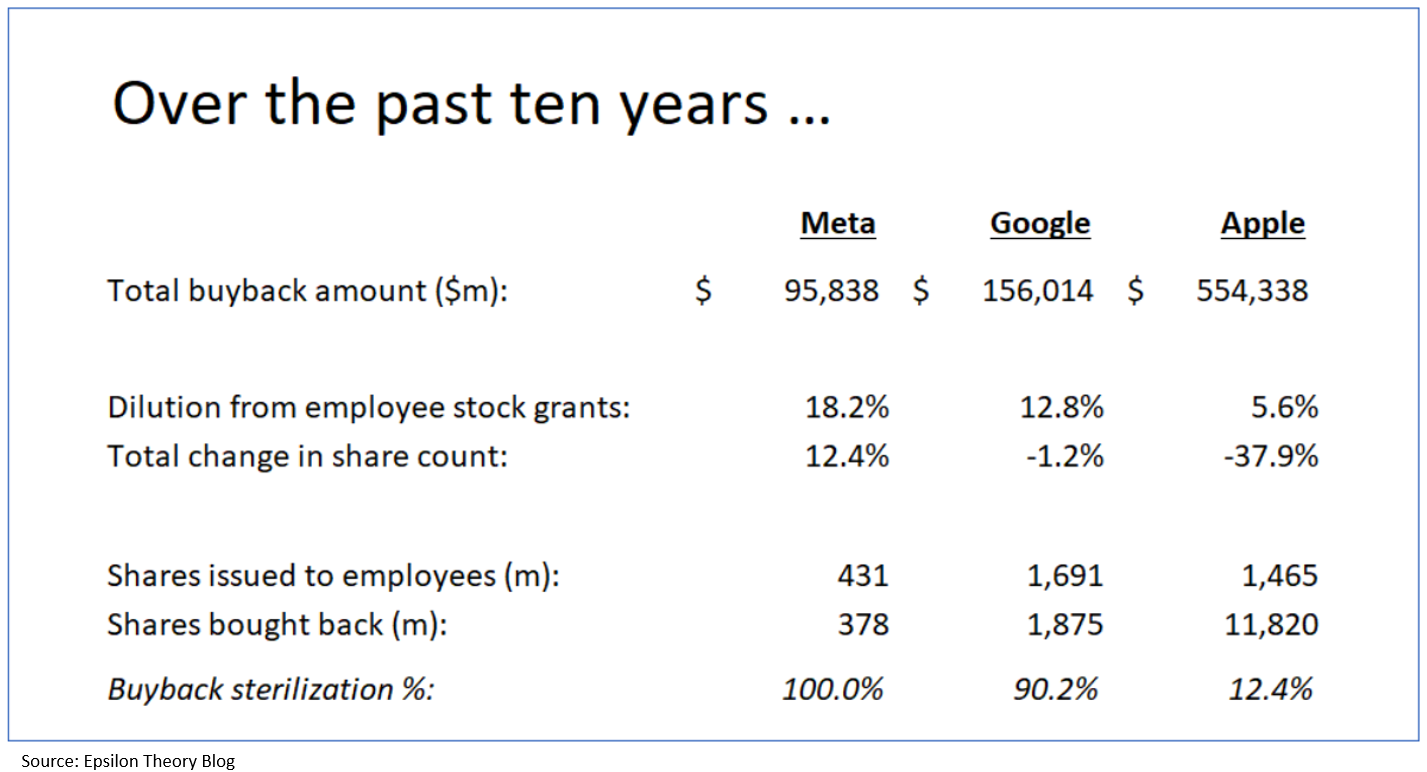 Buffett is laser focused on what he calls Owners Earnings, and that discipline will lead him to avoid erstwhile great companies that may not always treat their shareholders with the standard of accountability that he requires. This seems antiquated when things are going swimmingly, but it is in hard times that this discipline shows itself.

4. It’s been about 6 years since Berkshire began accumulating its approximately $120 billion position in Apple. The pick is one of the largest dollar winners in history. His increasing allocation into energy can only be viewed as prescient in a macro environment dominated by the unstable footing of energy availability. His war chest of cash leaves him strategically positioned to buy incremental dollars at 50 cents.

But what of the opportunity cost? If we do a simple analysis, replacing Berkshire’s Apple investment (tranche by tranche) with the most likely FANG comps (Google, Amazon, and Microsoft), we can see the difference in cumulative dollars over time: 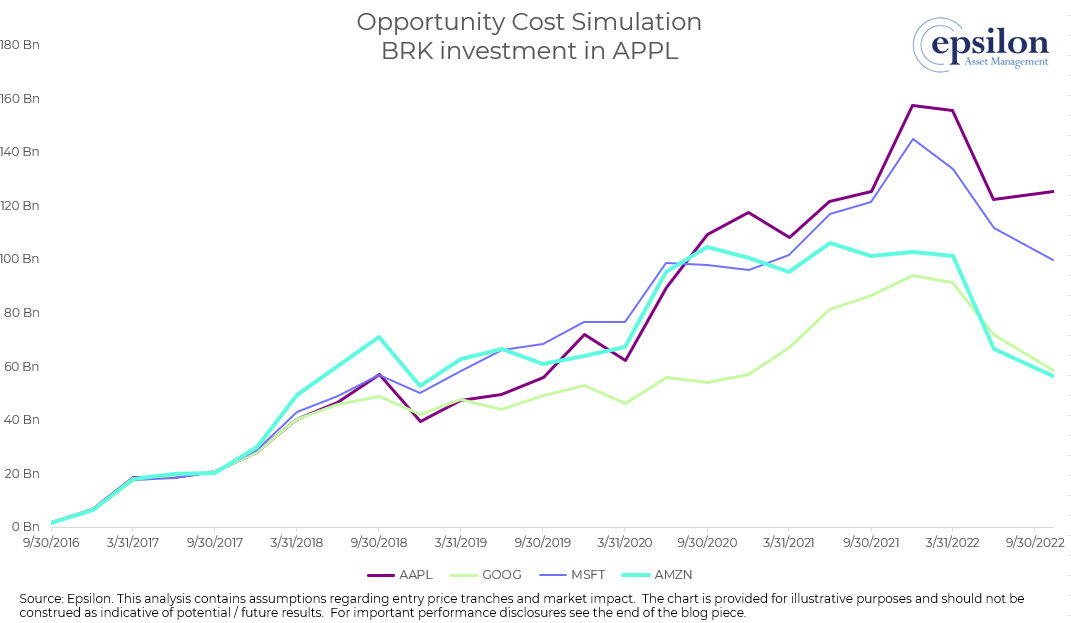 The closest comparable is Microsoft, a company Berkshire has avoided investing in given the close ties of the respective founders. Even still, a comparable capital deployment into MSFT stock would have netted Berkshire $25 billion less, as of the date of this publication.

This is not to say that Buffett’s vision is unparalleled; there are ample examples of historically great investors, plying their craft in their own ways, often generating superior rates of return. What makes Buffett unique is his longevity and scale, two things that cannot be at the mercy of manias.

The key to a multi-decade run of success is to combine unique gifts with self-awareness and temperance. For Mr. Buffett, his unparalleled combination of patience, focus on fundamentals, and the evolution of his holding vehicle has been truly special. There doesn’t need to be “The Next Buffett”. Let’s spare fellow investors. There certainly will never be one.

Featured Image generated by Dall-E 2 per OpenAI’s Terms of Use.